We are started the third phase in the grazing cycle of the Caldwell pasture. Prior to this, the second phase took about 7 weeks to complete. The second phase is drylot. Not the most exciting phase, but important from a health and safety standpoint. The second phase started when the cheat grass and foxtail barley went to seed. The dry seeds tend to get into eyes, and can do serious damage to the eye. So for drylot, they just stopped right where they were, and ate hay till the second wave of green got well underway. The drylot area is ideal for seeding. The surface is torn up topsoil covered with trampled down grass, waste hay, and of course manure.

The Dry lot area after they moved out. 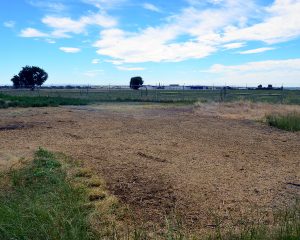 They moved about 120ft. (36m) to where the green grass and kochia start again. We are feeding a small ration of hay twice a day because kochia can very rich and cause scours. We have been using part of our limited water allocation to water the kochia before grazing. Kochia can be an oxalate and nitrate accumulator, and watering ahead of grazing can reduce concentrations. 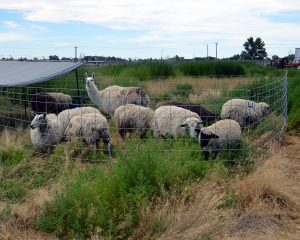 The area they grazed during the first phase was seeded with our own pasture mix. After 7 weeks of water, and sun the previously bare dirt now has our grass growing on it. In fact the earliest seeded, has pasture grass that is already going to seed itself. The new grass is protected by a three foot deep layer of sow thistle. 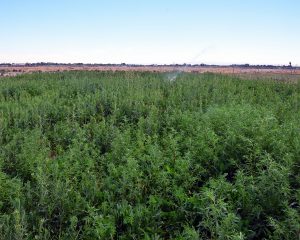 In about six weeks, the sheep will be done with the kochia, and the portion we can water of the pasture that was seeded last summer. Then the sheep will flip to the opposite end of the pasture, and start on the new grass and sow thistle. A couple of bonuses from last years seeding are chicory,  birds foot trefoil, and a flowering plant that I will have to go through the seed lists to identify. 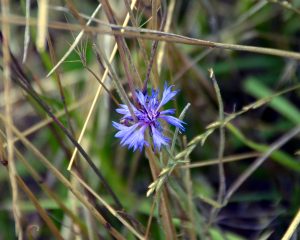