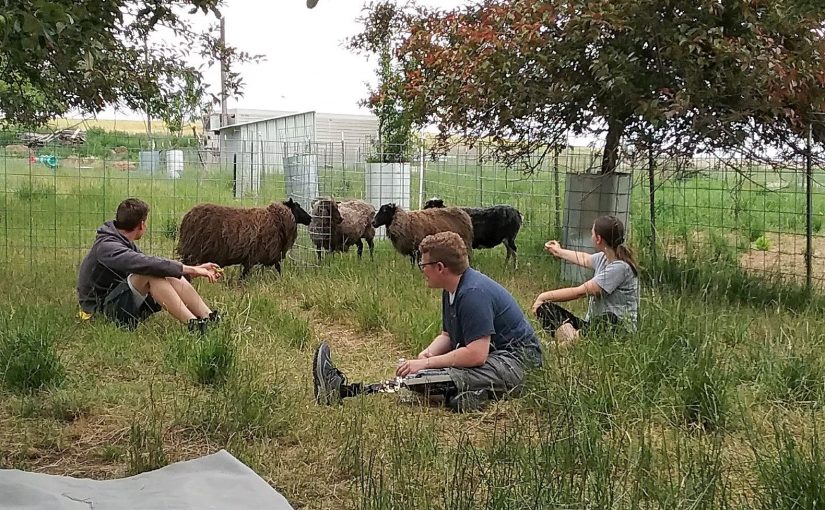 When the COVID lockdowns were beginning, we were concerned that the effect of the lockdowns on volunteer participation was going to be devastating. We were looking at the up-coming shearing season, and fencing the new pasture had just begun. However, we have had more volunteers than ever this last year, and they have done a phenomenal amount of project work. The fencing of the new pasture is a great example; about a hundred ranch panels and two hundred t-posts were put in place. About a quarter of those t-posts were set two feet into rocky ground. All the while, the new pasture was being cleaned up and seeded, and the typical sheep management continued as well. The work done by the volunteers this last year can only be described as heroic.

In the fall of 2019. I listened to a podcast dealing with running a nonprofit. One of the statistics they had was that the health and longevity of a nonprofit was correlated to the percentage of volunteers who were female between the ages of 16 and 29. The more the better. At the time, the volunteers at RescEwe were averaging about 50 years of age, with some almost 80. I told that statistic to some of the board members, and they did a week of prayer asking for more young women to volunteer, and then they dropped it. We never discussed this outside the board. Then about three months later the improbable happened. A regular volunteer who never knew about the statistic or the prayers, was having lunch at a burger joint in Parma. She started talking to a young woman at the next table about RescEwe, and how we are always welcoming volunteers and teaching shepherding. The amazing young woman turned out to be an LDS missionary, and was always on the lookout for ways to serve the community. From that point on, she and or her fellow missionaries have participated in almost every work day at RescEwe. Most all were in the area for a few weeks, and then they were off to another post. Some were from cities, and others from farms or ranches. Very few had ever worked with sheep. It is gratifying that many of these volunteers have had a memorable experience with the sheep, and some now plan to have their own sheep in the future. As we look back at the participation of the LDS missionaries during the year, we have to say that they were a real Godsend.

What can I say about the people who volunteer for hard physical work like fence building, and hay stacking. They are their own breed apart. Although this is not part of the daily work we do, it is a very important part of our programs and projects. Without their help, the new pasture would not be usable, or even safe to graze sheep on. Bear in mind the adjacent road is a busy state highway, and we have spotted coyotes and dogs roaming the area. A good strong fence is a must for the Caldwell pasture. Hay moving and stacking is a necessary part of winter survival in Idaho. The volunteers who moved our hay got a workout, but many hands make light work, so I can not complain myself. There would be no winter feed put up without these volunteers.

Shearing days saw the greatest amount of participation this last year. Most all the volunteers received the opportunity to try their hands with manual blade shears, and the braver ones electric shears. Sheep need regular maintenance like shearing, and hoof trimming, so this has been a good opportunity every year to bring people together with sheep and make a fun day of it.

Volunteering has many rewards for us. There is the fellowship with others who love working with sheep, working with the sheep themselves, learning about pasture management, or the simple pride in making a real difference. All the volunteers have had their own reasons for volunteering. Regardless of their reasons, our volunteers have gone above and beyond this last year. We are very thankful that they have chosen to be a part of RescEwe’s mission. There would be no RescEwe without them.