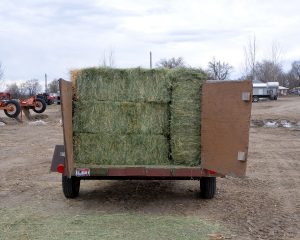 Over the weekend, we got some new hay in. Teff is a hay that the Fantasy Farm sheep have enjoyed most winters since they first tried it eight years ago. Although not always in plentiful supply in our area, They have been able to find it during breeding years. Typically, they feed Teff to the pregnant ewes during the last month of their pregnancy, and during lactation. It is a fine stemmed grass hay that in our region, has a nutritional value close to alfalfa (lucerne), but without the risk of bloat.  High in calcium and protein, the Icelandic ewes do very well on Teff, find it very palatable,  and waste very little. So when the folks at the Fantasy Farm found a stacker load at a good price, they gave the Rescewe sheep a third of it.

None of the Rescewe sheep appear to have never tried Teff. At least they approached it with some hesitation. Surely it is different from the grass / red clover mix hay they have been eating all winter. However, once they tried it, it was a big hit. The sheep were even digging through the clover mix to get at the Teff. The feeding tubs were virtually vacuumed clean the next morning. 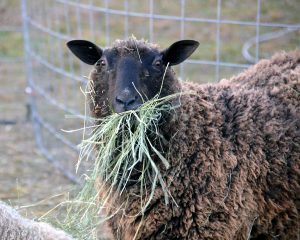 “On a scale of one to ‘Nom Nom’, I would have to give Teff an eight” – Remmington