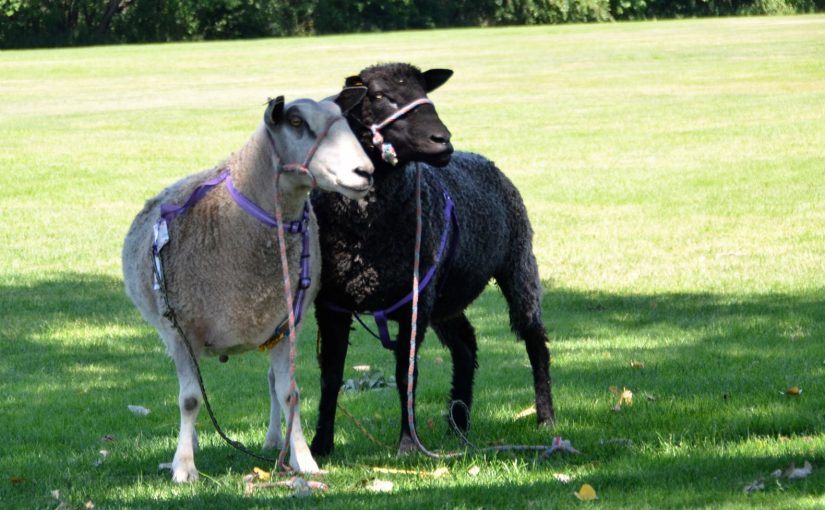 Smith and Tolkien did not know what the day had in store for them, but we had been planning an outing in the park for about a month.

We had selected Centennial park because it was about a mile away from the Caldwell pasture. Centennial park also has large soccer fields and an off leash dog park. We wanted to get Smith and Tolkien a feel for public parks, and see how they would react to other animals. They have been selected to represent the RescEwe sheep at Pet Extravaganza 2019. We selected them because they are best buddies, and combined they weigh 570 lbs. (258kg). We are assuming that the greatest number of pets attending the event will be dogs. They should be able to stare down just about any dog, but we had no idea how they would react when confronted by any dog. We soon found out.

Smith and Tolkien were tethered to an old cottonwood tree with 50 ft. leads. They moved as far away from the dog at the picnic cover as they could, and one was carefully watching him at all times.

Good thing it was not a sheep dog, but wait, isn’t that a Corgi over there.

They were vigilant, but never acted scared.

Even when confronted with a small yappy dog.

Or lions, tigers, and oh my a SQUIRREL…

We have three more weekends before the Pet Extravaganza, and will be trying out a busier park each weekend.

And yes, we poop scooped behind our sheep. However, not all of the dog owners did.