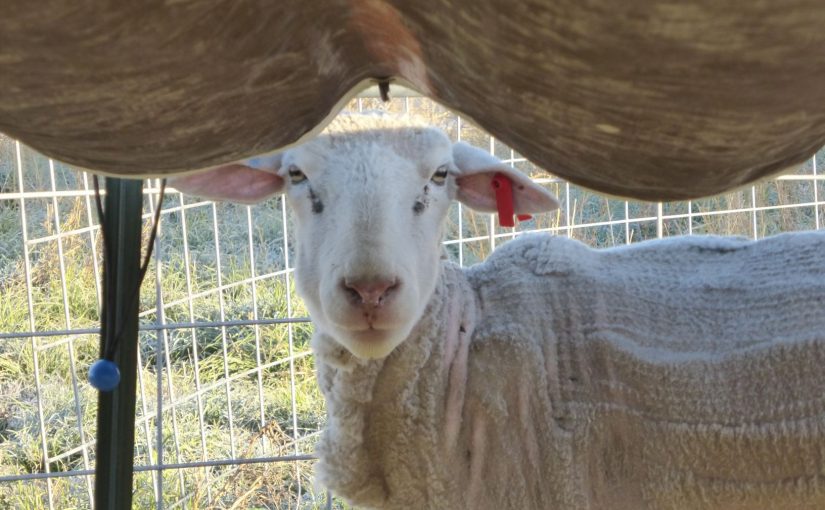 Since our inception, we have had four classes of sheep we have wanted to give assistance and sanctuary to. Bo Peep fully fit the bill of a lost sheep. Every year in our region, range sheep migrate to their summer grazing grounds in the Spring, and back to their winter lambing grounds in the Fall. From the time they set out, to the time they return, they are walking, walking, and walking. Early on, we defined our radius of influence for different classes of sheep in need, and have been aware of the plight of the range sheep that fall behind and are separated from their flocks. We have been wanting to help these sheep, but because of the distance from our home base, and the need for local volunteers, there has not been a real opportunity for us to help…

On October 25th after being offline for about 36 hours, I logged on to my computer. The first message I opened was from Angie at Idaho Farm Animal Sanctuary. I had met Angie a few years back, at a series of workshops she put together for people wanting to start their own animal sanctuaries. I knew it must be something important, and it was. She informed me that there was a sheep in dire need in the Ketchum area. It had been on the highway, apparently injured, and some concerned people were trying to help it to safety. They ultimately were able to trap it in the lobby of a business building. However, in the morning it had been released, and was on the loose again, lost and very confused. She also said that the kind couple who found and trapped the sheep were from out of town and had to leave for California. Angie had contacted the Ketchum sheriff, but they had no way to help the situation, and Angie was herself heading out of town as well.

I myself then contacted the sheriff, and they could give me no other information other than that the sheep was last reported to be walking north on highway 75, and that the owners were not going to come back for a single lost sheep. It was fast approaching the time for me to head into town to feed the sheep, so I decided to head into town and ruminate on what we could do.

When I logged back on late in the evening, noticed I had e-mails and messages that looked like they were concerning the lost sheep. Now identified as a ram. One email was from Laura, who with her boyfriend Clint were the ones who managed to trap the ram in the business lobby. The other emails and messages were from Aimée Christensen founder of the Sun Valley Institute for Resilience and CEO of Christensen Global Strategies. Aimée had been contacted by a close relative who knew Clint. This is where all the necessary and amazing people, and the networking that made this possible comes into play. Aimée contacted Sara Berman at Squash Blossom Farm . Sara could not take the sheep, but put Aimée in touch with Cindy Hamlin. Cindy had already adopted a lost ewe weeks earlier, and was at capacity. However, Cindy agreed to give the ram a place to stay until he could be rehomed to a sanctuary. Cindy only has ewes, and no desire for lambs. With this being the time of year when love is in the air for most sheep, that was a very brave offer. Aimée then contacted Brian Bean of Lava Lake Lamb, who supplied the hands to round up, and a trailer to transport the ram. When the ram was rounded up by Brian and the knowledgeable hands, they correctly identified him as a her. This undoubtedly was a great relief to Cindy.

Cindy described the ewe as “skinny, shivering and cold” when she arrived. Aimée volunteered to get her a coat to help her withstand the 11°F (-12°C) temperatures that the Wood River Valley was experiencing. Cindy had her vet come out and give Bo Peep a once over. She was found to have a little lung congestion, was treated for it, and was dewormed as well. With the shelter and good feed Cindy was providing, Bo Peep was doing much better, and starting to fill out.

It would be a week before we could make the trip to pick up Bo Peep, but she was safe and in the hands of a good shepherd. During the week , and as late as the night before we left to pick Bo Peep up, we continued to cast about the idea, that if Cindy had changed her mind, and wanted to keep Bo Peep, all was good as far as we were concerned. Part of our philosophy at RescEwe is that if a sheep in need can go direct to a good home without ever stepping inside our gates, it is as much a win as having them join the RescEwe flock. We just want all sheep to have good caring shepherds, however that happens. Even though Cindy enjoyed having her there, she could not keep her.

When Bo Peep arrived at the Caldwell pasture, we immediately put her in quarantine. We selected Betsy as her quarantine buddy. As part of her admission health evaluation, we found her to have some problems with her back left leg, and two older symmetrical wounds on upper part of her back legs that were about half healed. The one on the left is the worst of the two, and may be part of her issue with that leg. We have no proof as to what caused the wounds, but we have an unproven theory we are looking into.

The forage in the Caldwell Pasture is different than the forage Bo Peep was used to in the mountains. It took about a week before Bo Peep was acclimated to the pasture grass available in the Caldwell pasture. For good rumen health, feed changes should be made very slowly, and carefully. We kept her diet fairly simple and bland; green grass and second cut grass hay for about a week. After that we started giving her access to the sunflowers and diakon radish that is growing in the rest of the pasture as well. Neither girl is into the radishes themselves, but they do like the radish tops.

There was a little friction between Bo Peep and Betsy at first. The typical hierarchy establishment between adult ewes, but Bo Peep is very humble, and they settled in fairly quickly with very little conflict. The main group of sheep, and the quarantine group are moving closer daily. Soon they will be sharing a fence. A couple days of that, and they will be ready to mix.

Yesterday marks three weeks since Bo Peep was found walking the highway. With three weeks of good care by caring shepherds she has improved significantly. Our vet was out for Bo Peep’s blood test this week, and commented that she is looking pretty good. She is still a bit skinny, but not abnormal for a ewe that has recently weaned off a couple lambs. I suspect that she will be at a weight we typically want our ewes to be at within a month.

Your days of roaming the mountains as one of a thousand are over Bo Peep. Welcome home.

“Then Jesus told them this parable:  “Suppose one of you has a hundred sheep and loses one of them. Doesn’t he leave the ninety-nine in the open country and go after the lost sheep until he finds it?  And when he finds it, he joyfully puts it on his shoulders and goes home. Then he calls his friends and neighbors together and says, ‘Rejoice with me; I have found my lost sheep.’” Luke 15:3-6 NIV