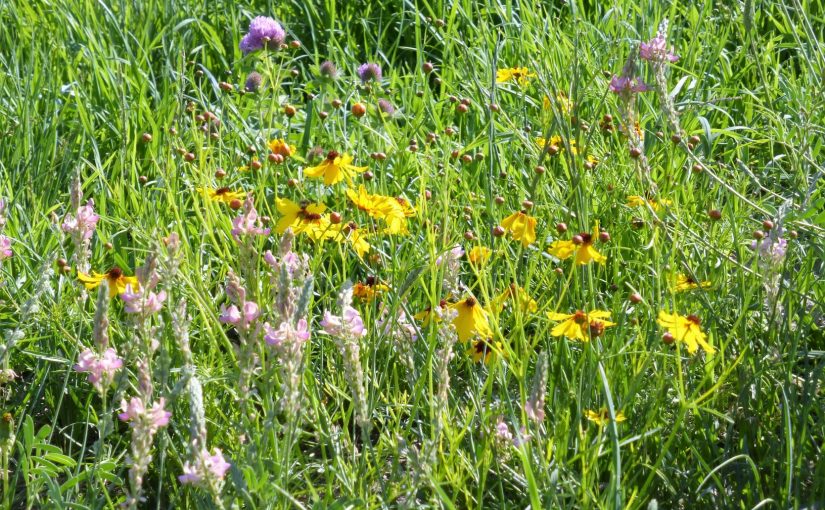 At RescEwe we believe that healthy and diverse pasture makes for healthy and happier sheep An important part of what we have done, has been serving as a demonstration of how sheep can be an important partner in building a complete pasture. A complete pasture becomes its own ecosystem full of a diverse sampling of living things, and will sustain itself, evolving with changing situations.

A Brief History of the Caldwell Pasture

The Caldwell pasture area was first offered to our angel the Fantasy Farm. Rescewe had no sheep yet because we had no land to put them on yet. This looked like a great way to get things going. The land was originally part of the Boise River riparian zone, which is a very rich and diverse natural community. We found that there is water available fairly close to the surface. However at that time, it had mostly shallow rooted, and short lived pioneer plants like cheat grass and foxtail barley that did not take advantage of the ground water, with a few invasive/noxious perennials thrown into the mix.

So, the fantasy farm submitted a proposal to the owners of the property which was accepted. They moved sheep onto the land, and started the seeding and irrigating. The sheep are the pivot of the whole development. The sheep are the reason for the pasture, and an important part of the transformation. Broadcast seeds are worked into the soil by the grazing sheep and the sheep knock down competing weeds and fertilize the soil. Every year the pasture becomes richer, and the soil richer as well.

We have seeded eight different types of grasses, five legumes, and twelve different herbs and forbs Using Fukuoka’s principle that plants will grow where the are best suited, we just broadcast all of it everywhere. Somethings never came up, or did not thrive, but the ones that did, did very well. It is interesting that some grasses did well in one spot, and 20ft. away others did better. There are a few places where there are stands of one type of grass, and almost none of the others.

The second year, we got some sheep. However, that was the first year of the water drama , and there was not a lot of forward progress. We did however learn that the choice of deep rooting grasses and forbs was a really good decision. They survived without irrigation.

Skip forward another two years, and we now have full irrigation, and things are advancing at a good pace. These pictures were taken over five weeks ago, after 1 grazing cycle, and 2 rounds of water. This week, things look completely different. Because we seed with most rounds of grazing, the last two rounds of seeding have produced lots of new plants coming up in the areas covered in cheat grass and foxtail barley. There should be a lot less of those pioneer grasses next year.

As the pasture has developed, many animals have moved in adding to the few that were making a home there before we started. The vole and mouse populations have seen an increase, as have the number and diversity of pollinating insects. Toads moved in to feast on the insects. last year a feral cat raised a litter of kittens, well fed on the mice and voles. She and her kittens left before winter set in. This spring one of her kittens came back and raised a litter of her own in the pasture.

We also saw the first snakes last year. Three in total; a Terrestrial Garter, a Common Garter, and a North American Racer. This year we have not seen a single snake yet. We are hopeful however. The Red-tail Hawks in the elm tree have once again fledged some chicks. The Male was working the pasture as part of their territory. We are pulling together the parts for a raptor perch. It should make his life a little easier next year, and give him a good spot to watch the pastures.

It is exciting to walk the pastures, and see the changes every week. The flowers, the forage, and even the weeds come and go in cycles. We invite anybody to come on out, and take a look at what we are doing. We can not always explain why things are happening, but we can explain what we are doing that brings about the changes. If you have any recommendations we are open to that as well. This is a learning process for all of us involved.